Sandra Průša is a translator and art historian. She is the head of exhibitions and collections at Museum Kampa.

Art critic and theoretician. Co-founder of the legendary avant-garde Galeria Foksal established in 1966, which for many years was considered the most prestigious and ambitious Polish art gallery. Co-author of its fundamental texts and programmes.

She studied at the Catholic University of Lublin, where she defended her master thesis on the paintings of Tadeusz Kantor, whom she met at that time. During her studies she became friends with the future art critic Wiesław Borowski. Both of them where among the founders of the Foksal Gallery.

She emigrated to Paris in 1970. Privately she was the life partner of Edward Krasiński, a neo-avant-garde painter and an author of installations (plus, another co-founder of Galeria Foksal). Subsequently, she became the partner of Eustachy Kossakowski, a photographer of the life of Polish art milieus of the 1960s. 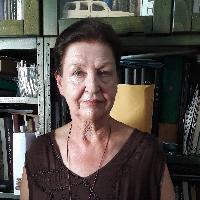 Alenka Puhar is a Slovenian journalist, translator and current affairs writer who was born in Černomelj in 1945. She graduated with a degree in English and comparative literature from the University of Ljubljana. Already in the 1970s, she joined the intellectual circle of young Slovenian dissidents, and in the 1980s she became more active in the human rights movement, especially with regard to the abolition of the death penalty in Yugoslavia.

She worked as a journalist in Ljubljana's daily newspaper Delo and the magazine Nova Revija, and as a translator and researcher. The turning point in her professional life and her views on society came when she translated George Orwell’s book 1984, which she translated into Slovenian in 1967. This was the first translation of this book in any of the languages of the communist countries. When translating Orwell, Puhar realized how Yugoslav society was very similar to the one described in the dystopian novel 1984, and that realization changed her view on society. She first became a latent oppositionist and then a public one in the 1980s. She was one of the organizers of the petition for the abolition of the death penalty in 1983, and in 1987 she participated in the establishment of the Yugoslav section of the International Helsinki Federation for Human Rights. She was also on the board of the Committee for the Defence of Human Rights, which became the largest social platform in Yugoslavia in the late 1980s and was responsible for organizing mass demonstrations in Ljubljana. She actively participated in the Slovenian spring, and after Slovenian independence, she continued working as journalist and human rights advocate as a member of the European Commission against Racism and Intolerance (ECRI) which is the human rights body of the Council of Europe.

Alenka Puhar is the author of several non-fiction works: Peticije, pisma in tihotapski časi (Petitions, Letters and a Time of Smuggling, Maribor: Obzorja, 1985), Slovenski avtoportret 1918-1991 (A Slovenian Self-Portrait, 1918-1991, Ljubljana: Nova revija, 1992),  Skriti spomin (Hidden Memoir, by Angela Vode, ed. Alenka Puhar, Ljubljana, Nova revija, 2004), and Pozabljena polovica (The Forgotten Half, co-edited with Marta Verginella, Ljubljana: Slovenian Academy of Sciences and Arts, 2007). She was also among the first to deal with the psychological history of childhood in the Balkans and wrote the monograph Prvotno besedilo življenja (The Primary Text of Life, Zagreb: Globus, 1982) on that topic.