Leonhard Lapin is an Estonian architect, artist and poet. He graduated from the Academy of Fine Arts as an architect in 1971. He was active in the avant-garde from the 1960s. Since the avant-garde was prohibited during the Soviet period, he could not find work as an architect, nor exhibit his artwork officially. He and like-minded artists organised semi-legal or illegal exhibitions. He was also active in the 1970s, editing manuscript magazines and creating texts and illustrations. Some of his work was shown outside the Soviet Union in Western countries in the 1970s, and it was highly praised. Since 1990, he has been a teacher at the Academy of Fine Arts, and since 1995 he has been a professor. 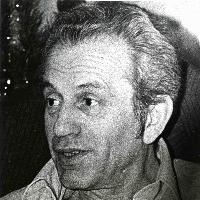 Jiří Lederer was born on July 15, 1922 in Kvasiny near Rychnov nad Kněžnou. In Rychnov he later studied at grammar school. During the war, he was completely engaged to work in Wroclaw, to where he had fled and was hiding in his home region by the end of the war. After the war he studied philosophy and politics at the Political and Social College and at the Faculty of Arts of the Charles University in Prague. From 1948 to 1949 he studied Polish Literature and Sociology at the Jagiellonian University in Krakow.

After the war he published in the Social Democratic Letters, was an activist in the radical left-wing of the socially democratic youth, and in 1948 participated in the merger of the CSSD (Czechoslovak Socialist Democratic Party) with the Communist Party, which he later left. In 1948 he became the editor of the World in Paintings. For his disagreement with the practice of the 1950s, expressed at the conference of the Czechoslovak Union of Journalists, he was expelled from the union and could not publish or perform any work on culture. From 1951 to1954 he had to work in Ostrava's mines of ČKD.

Later, he was given amnesty and became the editor of the World of Soviets, and in 1956, Evening Prague, from where he was fired in 1958 for a positive review of the “Coward's” novel of Josef Škvorecký, which caused a great disturbance at the time. For a year he was unemployed before he was taken to the Technical News as an editor in 1959. Between 1962 and 1967, he was head of the Research Department of the Czechoslovak Radio, then the editor of the Weekly Literary Sheets (or Sheets) and the Reporter. Lederer was one of the most prominent publicists of the Prague Spring of 1968. In the 1970s, Lederer was deeply involved with the Czechoslovak dissent and was one of the first signatories of Charter 77. During the “Normalization Period” he was imprisoned several times (1970, 1972-1973 and 1977-1980), the first time for writing as a pretext for his attitude about the events of 1968 in Poland, the second time for the publication of interviews in Reporter with the writers who were not allowed to publish and for sending their works abroad. In 1980, he emigrated to the Federal Republic of Germany because of political pressure from the StB Asanace campaign. He continued his journalistic work in West Germany until he died at the age of 61 on 12 October 12 1983 in Birnbach, Bavaria.

He published several journalistic essays and books of essays (České Rozhovory, Cologne 1979; Když se řekne Voskovec – Když se řekne Werich, 1982, Mé Polsko, 1982) by samizdat and abroad while in exile; posthumously his book Jan Palach: A Report on the Life, Action and Death of the Czech Student (Prague 1990) was published.

Hardijs Lediņš (1955-2004) was an iconic personality in the Latvian avant-garde of the 1970s and 1980s. While still at school, he created several hand-written samizdat magazines, together with his classmate Juris Boiko (1954-2002), influenced by Dadaism and the absurd. These publications attracted the attention of the KGB, and almost all the magazines were confiscated after it searched Lediņš' home. Nevertheless, he was able to enter the Riga Polytechnical Institute to study architecture in 1973. His friend Juris, whose parents were victims of political repression, was not so lucky. While student Lediņš started to organize experimental disco-lectures at the RPI Student Club. The first part would be a thematic lecture about architecture or contemporary music, but the second part consisted of listening to music and dancing. The discos were extremely popular, and tickets sold out in 15 minutes. Lediņš lectured on popular music, rock, and contemporary ‘serious’ music of the New Viennese School, Paul Hindemith, Charles Ives, John Cage, etc. The disco-lectures ended in 1977, when, after the Second Festival of Contemporary Music, the organization of which Lediņš also took part in, the director and the artistic director of the Student Club were dismissed. For some time, Lediņš continued the discos in Jūrmala and provincial towns. He also organized his home recording studio Seque, where he, Boiko, and the architect Imants Žodžiks recorded their own experimental music, inspired by art rock and the avant-garde. In 1981, together with the visual artist Leonards Laganovskis and some other friends, he started a new project, the Kosmoss discotheque, where mainly New Wave music was played, but it also became a place where Latvian alternative music was performed. The group ‘Dzeltenie pastnieki’ (The Yellow Postmen) played their first hits there, based on lyrics by Lediņš and Boiko. A new element was introduced: visual effects and multimedia experience. In 1983, Kosmoss was closed down by the authorities, due to its ‘ideologically and morally harmful character’. As an architect, Lediņš was interested mainly in the philosophy of architecture in its postmodernist expansion (the ideas of Robert Venturi and Charles Jencks), the living environment, and the perception of living and urban spaces. Architectural ideas were integrated into his art projects: actions, performances and videos made by the NSRD (Workshop for the Restoration of Unfelt Feelings), which was first established in 1982 as an experimental music group, when Lediņš and Boiko were joined by the musician Inguna Černova. But later they gave this title to all the activities of their collective, which also included actions, performances, videos and multimedia art. Photographs from some actions were shown at exhibitions of work by young architects, and also at the exhibition ‘Vide, daba, cilvēks’ (Environment, Nature, Man) in 1984, the first exhibition where conceptual art was publicly shown. However, most of his activities were of an underground nature, and this was not only because the avant-garde art practized by the NSRD was not officially accepted, it was also a conceptual choice. For example, Walks to Bolderāja were considered by Lediņš as a private meditative practice. In the mid-1980s, Lediņš and Boiko created the independent artistic programme ‘Approximate Art’. With perestroika, the NSRD was able to popularize its art openly, the number of publications about the group increased significantly, and the NSRD participated in exhibitions. Lediņš and the NSRD received international recognition thanks to the exhibition ‘Riga-Latvian Avant-Garde’ in West Berlin, Kiel and Bremen in 1988 and 1989. The exhibition was a great success: it was the culmination of the NSRD’s activities, but also its end. From 1989, Juris Boiko and Hardijs Lediņš worked individually. Lediņš created the Approximate Art Agency with the aim of realizing a broad range of practical activities. However, its integration into international art proved to be more difficult than expected, and for several years Lediņš lived through a creative crisis. In the 1990s he started to experiment with electronic music. One of his last big projects was staging the opera ‘Rolstein on the Beach’ (an allusion to the opera ‘Einstein on the Beach’ by Philip Glass and Robert Wilson) with Kaspars Rolšteins in 1997.