František Hýbl is a Czech regional historian, expert on Jan Amos Komenský, museologist and former director of the Comenius Museum in Přerov. František Hýbl graduated from the Pedagogical Institute and the Faculty of Arts at the Palacký University in Olomouc, and then continued studying Czech language and history. He was the director of the Comenius Museum in Přerov (1992-2008); he worked there since 1969. In his work he dealt with the theme of killing the Carpathian Germans at Švédské šance in 1945, for which he was awarded the Cross for Merit with the Ribbon of the Order of the Federal Republic of Germany in 2017. 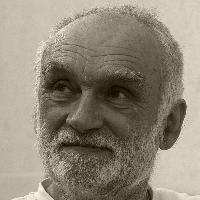 Jiří Hůla studied mathematics and gymnastics in the 1960s at the University in Olomouc. He worked for Podnik výpočetní techniky. Meanwhile, he composed poetry, made geometrical compositions and wrote about the fine arts. In 1983 he founded Galerie H together with his brother Zdenek (who had graduated from the Academy of Fine Art) and that was the moment when his interest in art, exhibitions, and documentation connected.

Jiří Hůla does not believe his work to be solely part of the unofficial scene. From his point of view, underground fine arts never existed, as it is not easy to decide who was an official artist and who was unofficial. Any attempt to do so may misrepresent the history.