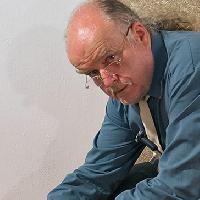 Kwiek, Przemysław
Przemysław Kwiek (born in 1945 in Warsaw) in the years 1971-1987 was a member of the KwieKulik artistic duo, together with Zofia Kulik. They were involved in process art, performance, and conceptual art, which represented politically engaged and critical tones.
Simultaneously, since the late 1960s they regularly documented the artistic life in Poland, focusing on ephemeral phenomena.


Kwiek was born to a family with pre-war medical traditions. Both his parents were doctors, involved with the communist system. Kwiek’s mother was a high-ranking party activist in health care administration. His father was a colonel in the army.
As a teenager he joined extracurricular sculpture classes at a Warsaw cultural centre. There he met Zofia Kulik.

He studied at the at the Faculty of Sculpture at the Warsaw Academy of Fine Arts. He found himself in the studios of Oskar Hansen and Jerzy Jarnuszkiewicz, whose didactic and theoretical activities had transformed into a multigenerational tradition, which to this day remains important for a number of outstanding Polish artists. Zofia Kulik has also passed through both of these studios.

After he had artistically parted his ways with Zofia Kulik in 1987 and discontinued joint actions, he did not abandon his strategies of arranging interventions, which he had elaborated in the 1980s.
Maryla Sitkowska wrote:

“He attaches great importance especially to a thread, which Zofia Kulik has abandoned, that is reacting directly and intervening (through letters, protests, and actions) to pathologies observed in social life.
Similarly as in the years of KwieKulik’s activities, Kwiek continues to treat such «actual life cases» as a material for art Actions.
His performances cover a variety of multimedia art genres, and since the very beginning of his independent activities he has been using the term «appearance». […]
Moreover, both in his artistic milieu as in his own neighbourhood, Kwiek is renowned as an organiser and social activist.”

In 1988 he founded the Association of Artists of Other Art Forms.

Josef Kytnar is a programmer and LP collector. His brother played in the band Makyota and Josef was a “non-playing” member of the band. He is the co-author of a discography overview of rock (and similar genres) recordings on LPs (Balák Miroslav, and Kytnar, Josef. 1998. Československý rock na gramofonových deskách: Rocková diskografie 1960–1997. Prague: Indies Records). Josef Kytnar was one of the founders of the Popmuseum, the institution owning a large collection of items connected to Czech and Slovak pop music, and he is active in its branch in Brno, where the archive of LPs is located, until today. Within Popmuseum, he is engaged in the digitization of music records, mainly LPs. He has a collection of almost 10,000 LPs, especially Czech and Slovak rock, pop and jazz music.

Kaja Kärner was an Estonian artist. She studied at the State Industrial Art School, the Pallas Art School, and the Tartu State Art Institute between 1937 and 1948. After finishing her studies at the Tartu State Art Institute, she worked there as a drawing teacher. She also became a member of the Estonian Artists' Union. She was a member of the Tartu Circle, of which most were arrested in 1949. Although she was not sent to prison camp, she was expelled from the Artists' Union, lost her job as a teacher, and had to work as a label painter at the Trade Administration in Tartu.

After her friends were released from prison, she too could act more freely. She worked as a freelance artist until 1988. As a member of the Tartu Circle, she used an abstract and colourful style. In 1984, she returned to the Artists' Union. Since 1988 until her death in 1998, she worked as a teacher at the Konrad Mägi Studio.

Paulis Kļaviņš (1928-2016) was a Latvian-born religious and political activist, who lived in the Federal Republic of Germany. He studied theology at Bonn University, and afterwards was active in the work of the Pentecostal Church. In 1968, Kļaviņš and his wife Zeltīte read the book ‘Tortured for Christ’ by Richard Wurmbrand, a Romanian pastor who had been persecuted by the communist regime in Romania, and they were deeply impressed by it. In 1969, Kļaviņš met Wurmbrand, and in 1970 he and his wife started to work for the Christian human rights organisation Hilfsaktion Märtyrer-Kirche (HMK), which was part of the International Christian Mission to the Communist World founded by Wurmbrand. His main activity was working for HMK’s radio station, which broadcast programmes in nine languages in cooperation with the Swedish Pentecostal Church’s IBRA-Radio. Kļaviņš prepared the programme ‘Klusuma balss’ (The Voice of Silence), which was broadcast once a week in Latvian. He worked for the radio until 1992, when he moved back to Latvia.

In parallel, Kļaviņš founded the organisation Gaismas akcija (‘Action of Light’). It was registered in the USA in 1977, and in Western Germany in 1978. It had the same general aims as HMK, but it was aimed specifically at Latvia.