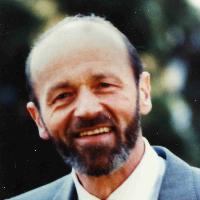 Ivo Kunštýř was born on 24 January 1932, his father was a veterinarian. He graduated from a French grammar school in Prague and started studying at veterinary medical school afterwards. Due to political reasons, he had to study at the University of Veterinary Medicine in Košice, however, he finished his studies in Brno in 1956. Until 1968 he worked at the Veterinary Research Centre in Prague. After the invasion of the Soviet armies in August 1968, he emigrated to Vienna and later to West Germany. From 1970, he worked as a veterinarian for experimental animals at Hannover Medical School’s Central Laboratory for Experimental Animals; he acquired his teaching certification there in 1975. He worked as a professor at the Faculty of Medicine. He was granted West Germany citizenship in 1978 and stripped of his Czechoslovak in the same year. He actively participated in Czechoslovak exile activities. In 1986, he was a founding member of the Czechoslovak Documentation Centre of Independent Literature, which was founded in West Germany and led by the historian Vilém Prečan.

Ivo Kunštýř participated at many scientific conferences and symposiums focusing on laboratory animals. He published in scientific journals, but also wrote short works of fiction under his pen name of Jaroslav Pulda. He retired in 1997 and died in Hannover on 1 August 2013. 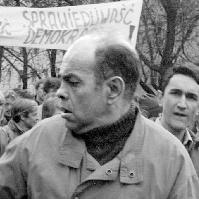 Kuroń, Jacek
Jacek Kuroń was a Polish dissident, opposition activist, and democratic politician. He is considered one of the towering figures and strategists of the democratic opposition in Poland and Eastern Europe. A Marxist revisionist and a member of the popular reformist movement in 1956, Kuroń became disillusioned with the communist party in the early 1960s and in 1965 he co-authored with Karol Modzelewski The Open Letter to the Party, the left-wing ciritique of the communist party state. The publication of the Letter marked Kuroń's first imprisonment in People's Poland. Althogether, he spent around ten years in communist jails. Kuroń was the godfather of the Polish student opposition in 1968 and one of the leaders of the Committee for the Workers' Defense, founded in 1976. Although projected as a rabid anti-communist radical by the communist regime's propaganda, Kuroń was a strong advocate for civil and autonomous society and a pragmatist who tried to tame radical tendencies in the democratic opposition and the "Solidarity". For example, he promoted the "Finlandization of Poland". that is the transformation of Poland into a democratic state with limited foreign policy. He participated in the Round Table Talks, became a member of the parliament in 1989, and served as a Minister of Labour and Social Welfare in the governments of Tadeusz Mazowiecki and Hanna Suchocka. In 1995 Kuroń unsuccessfully ran for an office of the President of Poland. Towards the end of his life, he became increasingly critical of liberal capitalism and the social cost of the post-1989 economic transformation.
több 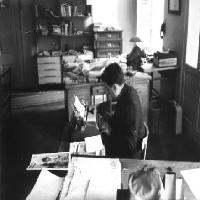 Živko Kustić was a Greek Catholic priest, theologian, journalist and writer who was born in Split on 12 December 1930. In his early youth, he was already involved in organizations within the Croatian Catholic Movement, such as the Križari (Crusaders), so he was the leader of one of its sections called Mali križari (Little Crusaders) in Pag. After World War II, he attended to the classics school in šibenik until 1949. He then studied theology in Zagreb, but then left in the 1950s and focused on studying mathematics and physics. He was ordained as a Greek-Catholic priest in 1958, and after that he resumed his study of theology, with a special emphasis on the Eastern rite. As a Greek Catholic priest, he presided over several parishes in the Žumberak region, not far from Zagreb, where he became acquainted with the future archbishop of Zagreb, Franjo Kuharić.

He worked in the weekly newspaper Glas Koncila from its beginnings in 1962, and he was its editor-in-chief from 1972 to 1993. Writing under the pseudonym Don Jure (Rev. George), his columns and articles in Glas Koncila under the heading ‘Letters from a Village Pastor’ dealt with the position and role of the Christian faith in socialist society. This polemical and satirical column appeared in 1964 and was the most feature in that Catholic weekly until the end of the socialist era. Due to the communist calls for hostility toward religion, the columns were often a topic of discussion in the Commission for Religious Affairs of the Socialist Republic of Croatia, which monitored and analyzed these and all of Kustić's other journalistic work.

In 1972, the government prosecuted Kustić for his editorials in Glas Koncila, in which he widely criticized socialism and disseminated nationalist propaganda according to the communist authorities. The verdict only came in 1975, when Kustić was banned from writing for a year. Kustić took part in a series of initiatives. For example, in 1968 he was one of the co-founders of the Christian Modernity Theological Association and the founder of Catholic Information Agency in 1993. After retiring from his journalist career, from 1998 until his death he wrote a column entitled ‘Morning Homily’ in the Zagreb daily newspaper Jutarnji list. He died in Zagreb on 19 July 2014.

Vincas Kuzmickas was a philologist and researcher of Lithuanian literature. He graduated from Vilnius University in 1967, and worked as a researcher at the Institute of the Lithuanian Language and Literature until 1976. While there, he prepared a selection of the writings of Vincas Pietaris. The volume was published in 1973. (But Pietaris' major work Algimantas, the first historical novel in the Lithuanian language, was not included.) Kuzmickas and Ilgūnas were both interested in Pietaris' life and work. They organised trips to places where he had lived in Russia and was buried, and they both collected material about him. 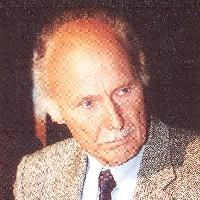 Jakša Kušan, Croatian journalist and writer, was born in Zagreb on April 23, 1931. In 1950, he graduated from the Classical Gymnasium in Zagreb. As a pupil, he often came into conflict with philosophy teachers on ideological issues. At the University of Zagreb, as a law student, unlike most of his colleagues who wrote about Marx's texts for seminar papers, he was interested in topics related to the work of Rosa Luxemburg and Karl Kautsky. His persecution began when he defended a fellow student before the University’s Disciplinary Committee. As a result of his engagement, from the beginning of 1954, he was harassed by other students - members of Party organisations. Soon, he was put on trial at the University and was charged a small fine, so he left Zagreb and continued his studies at the University of Belgrade in 1954. In Belgrade, according to Kušan, there was a completely different atmosphere, and he did not feel such strict control as in Zagreb (Interview with Kušan, Jakša_2).

Even during his student days in Zagreb, he was part of a circle of young intellectuals who were dissatisfied with the closed socialist system in the Yugoslav state and the lack of cultural ties to Western countries. They organised an illegal organisation called the Croatian Resistance Movement (HPO), which had a political platform. Stanko Janović, Ivo Kujundžić, Tvrtko Zane (Branimir Donat) and his wife Zorka Bolfek were some of the members. They were also disappointed with the poor information Croatian émigrés and the Western public had about the situation in Croatia in Yugoslavia. They were also dissatisfied with the lack of Western criticism of the regime in Yugoslavia, and so they decided that someone from the group should go to the West and continue engaging in journalistic work there. Kušan agreed that he would be that person because he was already under surveillance by the Yugoslav secret police (UDBA) (Interview with Kušan, Jakša_1).

In May 1955, he left Yugoslavia via Italy, moved to The Hague, where he received a scholarship at the Academy of International Law. At the beginning of 1956, he moved to the UK and in London he continued his education at the London School of Economics and Political Science (1957-1961), but he did not complete his studies because he was too busy working as a journalist and editor (Interview with Kušan, Jakša ). In 1958,  he was the founder of the periodical Hrvatski bilten (Croatian Bulletin), which was renamed Nova Hrvatska (New Croatia) in 1959. Although initially conceived as an informative overview of current events in Croatia, from the mid-1960s onward it became a critical and polemical magazine that published debates on the solution of the Croatian national question in Yugoslavia. The magazine was published until 1990, and had its most massive reach in Croatian emigrant communities (some issues even had a circulation of 20,000). Through Nova Hrvatska and throughout his work, Kušan advocated democratic and pluralistic principles and the freedom of the individual and freedom of peoples.

When he emigrated in 1955, he was not yet an advocate of pluralism or antagonistic toward socialism. He considered that, due to the character of the regime, it was impossible to expect the introduction of pluralism, but he believed that a big step would have been to allow factions within the Party. "I thought that it was necessary to expand the space for freedom within the League of Communists because Party members were then those who were responsible for doing something for their people" (Interview with Kušan, Jakša_2). Although he sharply criticised the communist regime, he also called on Croatian communists to resist the hegemony of centralists in Belgrade (Krašić 2016, 34). He advocated the need for reconciliation between nationalists and communists, and he felt that the radical methods used by some Croatian émigrés were not good. He constantly tried to prove that radical methods (terrorist attacks) were unacceptable to the world's political blocs, which preferred the preservation of Yugoslavia. He advocated a strategy of gradual development of democratic consciousness, co-operation among democrats, nationalists and reformist Croatian communists, and a transition to the rule of law throughout the Yugoslav federation. In that sense, he saw the mission of Nova Hrvatska - to "encourage democratisation within the League of Communists of Croatia, to reveal what was still hidden or censored in the homeland, to affirm the Croatian reform movement in the West to gain international sympathy and support" (Krašić 2016, 54). Even abroad, he was under surveillance by the UDBA.

After the fall of communism, he returned to Croatia in 1991 and became editor-in-chief of Hrvatski tjednik (Croatian Weekly) published by Matica hrvatska. In 1993, he became president of the board of directors of the Open Society Institute of Croatia, and from 2000 to 2004 he was chairman of the board of directors of the Croatian Heritage Foundation. He published his memoirs in 2000 in the book Bitka za novu Hrvatsku (The Battle for New Croatia).

He is familiar with the term/concept of cultural opposition. He thinks that the idea changed over time and that it has gained increasing importance (Interview with Kušan, Jakša_1).

He donated the archive and correspondence of the Nova Hrvatska editorial board to the National and University Library in Zagreb, but he still holds his papers at his home in Zagreb, which includes books, correspondence, brochures and photographs which testify to his oppositional activities.