A leading figure of West Bohemian underground culture and leader of the artistic group the Pathological Orchestra of the City of Marianske. He was also the author of its chronicle. He was known as a “mad” poet, artist and performer. The nickname “Mad” refers to his wild and vivacious nature and his unchained and energetic performances. His companions considered him a Czech form of the accursed poet, who lived according to his own rules during any regime. He was a lifelong “alternative” person and freedom-seeker. At end of his days he lived as a homeless person in Marianske Lazne. He died of a heart attack.

Józef Figiela is an unconventional figure connected to the underground post of the strike in the Lenin Shipyard in Gdansk in August 1980. For many years Figiela manoeuvred between two passions and two vocations: he was a captain of maritime shipping and a graphic artist. In 1950 he graduated from the State Maritime School in Szczecin and in 1964 he also gained a Master’s degree in the State Higher School of Fine Arts in Gdansk. For almost three decades he alternately sailed and worked as an artist.

In August 1980 he was supposed to go for another cruise, when the strikes in the shipyard broke. Figiela eagerly joined the protests. In order to support the strike’s ideas, the sailor-artist decided to use his creative abilities. On 20 August he created his first linocut. It presents a hand clenched into a fist (symbolising a fight), Gdansk’s coat of arms, and some nautical motifs. The copies in the form of a stamp were done on the envelopes and postcards in the white-and-red, Polish national colours.

During the strikes, Figiela created 4 seals, which were copied on a couple of hundreds of cards and envelopes. All the linocuts are characterised by a remarkably precise execution and high artistic values. The artist also drew his daughter (by that time a 15-year-old) Dąbrówka into the oppositional activity. She created her own seal (also very interesting graphically), as well as she helped her father with creating the copies for dissemination. 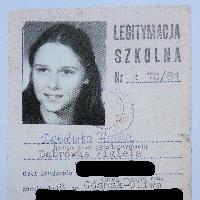 Dąbrówka Figiela-Miadziółko is a daughter of Józef Figiela who created stamps of the underground post during the strikes of August 1980 in Gdansk. At the time of the protests Dąbrówka was just a 15-year-old girl, but she engaged in helping her father with disseminating the stamps, as well as she created her own linocuts. She was responsible e.g. for getting the dates sealed on the enveloped in the post offices, which was a complicated task, as she had to visit the offices in the evenings and convince the post workers to put the seal with the tomorrow's date. This enabled her father to share the copies with the current date in the striking Shipyard the next day. Disseminating materials connected to the protests was illegal, so Dąbrówka had to use some tricks not to reveal the real cause of her visit – e.g. she often changed the visited post offices.

In August 1980 Dąrówka created her own linocut, which was of a particularly sublime content and nuanced graphic form, as for a teenager. The seal shows the Polish flag above the protesting mass of people. The text was supposed to say: “Only through strike we will win the just government”, however the first word did not work out and was cut out from the seal, accordingly to her father’s advice. Her linocut was copied onto the envelopes and post cards, and – along with the other materials produced by Józef Figiela – it was disseminated among the protesters in the Gdansk Shipyard.

In later years Dąbrówka Figiela-Miadziółko continued her artistic career. She graduated from the Fine Arts Academy in Gdańsk and worked i.e. as the books’ illustrator.

több
Filevska, Tetyana
Tetyana Filevska is independent researcher who discovered the Kropyvnytskyi archive and prepared documents related to Malevich for publication.
több
Filipowicz, Tytus
Tytus Filipowicz (1873-1953) was a Polish politician, diplomat, and veteran of the independence movement. While in the Polish Socialist Party, he was a close associate of Józef Piłsudski. Filipowicz was involved in the Promethean Movement and served as Polish ambassador to Georgia before the Bolshevik takeover. Later he served as Polish ambassador to Belgium, Finland, and the United States. Member of the Polish Government-in-Exile, Filipowicz stayed in exile after World War II. He was associated with the Józef Piłsudski Institute in London.
több
16 - 20
«« előző oldal 1 2 3 4 5 6 következő oldal »»