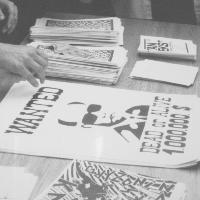 Wanted poster by Krzysztof Raczyński
The famous black and white poster was designed by Krzysztof Raczyński in 1989. It presented the face of the general Wojciech Jaruzelski with the comment below: 'dead or alive. 1.000.000 $'. The adaptation of the American 'wanted' poster convention was something new and shocking in the last years of Polish People's Republic. The graffiti template with serif signs and Jaruzelski's picture was created and painted on the streets by Raczyński between 1987-1988. After the success of the template the artist created the poster, printed and sold by the Gallery of Maniacal Activities in Poland and in Germany. The poster quickly became very popular among the youth and today is still one of the icons of the youth movements against the Wojciech Jaruzelski's government. In 1989, when the Gallery of Maniacal Activities popularized that poster, the socialist state was in decline and the police did not manage to control small groups of young radicals and their provocative anti-government activities.

több
Wasążnik, Michał; Jarosz, Robert. Generation (Generacja), 2010. Book
The „Generation” book (Generacja) pictures the Warsaw punk and reggae scene in the mid-1980s. The album includes 160 photographs of Michał Wasążnik who closely portrayed the bands and their fans: at the stage, in backstage, on route, during parties, on the street of socialist Poland. Pictures are accompanied with a text composed by Robert Jarosz from the statements of the music scene members and short introductions to the political and cultural events in the counter-culture, as well as socio-political situation of the Polish People’s Republic.

The book gives voice to musicians like Robert Brylewski (bands Brygada Kryzys, Izrael, Armia), Tomasz Lipiński (Brygada Kryzys, Tilt) or Paweł „Kelner” Rozwadowski (Deuter, Izrael), but also Paweł „Konjo” Konnak from the Gdansk artistic group TotArt or the organizer of the Jarocin festival Walter Chełstowski. Jarosz also managed to reach former authorities like Jerzy Urban (press secretary of Polish government in 1981-1989) or Aleksander Kwaśniewski (back then a Minister for Youth and an editor the youth magazine Sztandar Młodych, later a president of Poland).

Ha! Art., the publishing house form Krakow, describes the project in a following way: „« Generation» (…) presents a new imaginarium of the Polish popular culture in the 1980s (…) The new pantheon clears the field of culture from the mastodons like bands Perfect, Lombard, TSA, Turbo etc. [mainstream rock groups of the 1980s.].”

In the book one can also find a timeline of the most important events of the 1980s which influenced the punk scene, as well as detailed description of photographs. Jarosz’s text is included both in Polish and English version. 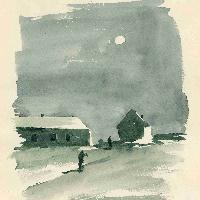 Water-color painting "25 kilometres from Omsk"
The painting in water-colors named by Kurts Fridrihsons "25 kilometres from Omsk", depicts a scenery from the Gulag camp or its closer environments. Although there are no typical attributes of the camp scenery such as wired fence, watchtowers (probably, because such paintings were not allowed to keep and to send home), mood of the painting is  gloomy and  full of desperation.
több 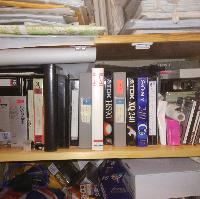 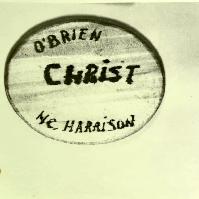 Wood-carved badges of the members of Clubul Regilor Liberi (The Club of the Free Kings), 1971. Photograph

The informative file on the creator of The Club of the Free Kings, Puiu Apostolescu, contains five photographs of two badges made of wood. They were carved by Apostolescu and sent to his friend, Eugen Mircea, in Târgoviște. The insignia were confiscated by the Dâmbovița county branch of the Securitate on the occasion of a search at Eugen Mircea’s home. The badges were one of the distinctive elements of a member of The Club of the Free Kings. They were supposed not only to differentiate the Free Kings from their peers but also to underline the hippy character of the group. Thus, on one side, the badges contained the name of the group, and the word “hippy.” The word “free” is written twice in the combination, with “The Free Kings” and “The Free Club.”On the reverse, the badges are individualised, as they contain the English nicknames of Eugen Mircea (Christ) and Puiu Apostolescu (O’Brien McHarrison) as a way of stressing their friendship and membership of the group (ACNSAS I 3032, ff. 128–132).