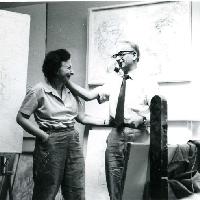 Themerson, Franciszka and Stefan
Stefan, born in 1910 in Płock, died in 1988 in London.
Writer, philosopher, composer, poet, and author of avant-garde, experimental films.
He studied physics and architecture in Warsaw.
Franciszka, born in 1907 in Warsaw, died in 1988 in London.
Illustrator, painter, scenographer, film producer. She studied at the Music Academy and the Academy of Fine Arts in Warsaw.
They were a married couple. Together they produced the 1930 Apteka (Pharmacy) film, 1932 Europa, and the 1938 Przygoda człowieka poczciwego (The Adventure of a Good Citizen).
Together they founded the Spółdzielnia Autorów Filmowych (Film Authors Cooperative) and published f.a. (as in art film) journal.
In exile they started collaboration with the Film Department of the Ministry of Information and Documentation of the Polish Government in London, which allowed them to shoot The Eye and the Ear and Calling Mr Smith (1943-1944).
In 1948 they founded the Gaberbocchus Press, an independent publishing house, which they managed until 1979.
több 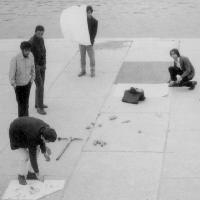 Tribina mladih (Youth Tribune)
In October of 1954 an event called "Vojvodinian Youth Poetry" took place in Novi Sad which became a first step in the active participation of youth in the cultural life of the city. The event was held at the Center of Youth, now Novi Sad’s theater. Events of this type were informally called “Tribina mladih” [Youth Tribune]. In 1956, an official organization was formed using the same name. Over the next two decades, the most important names within the Yugoslav artistic scene presented and discussed their work at Tribina. Tribina also became the umbrella organization of the two magazines, Polja and Új Symposion. In the late 1960s and early 1970s Judita Šalgo served as its program director. She was discharged in 1971 for political reasons.


During the period of the state’s stronger controls over artistic freedom, Tribina represented a home for Novi Sad’s neo-avant-garde artists. An exhibition in January 1971 at Tribina mladih yielded severe critique by the public. The exhibition that attracted the most attention was a display of a bank note surrounded by swear words. Tribina was accused of inciting immoral behavior and of collaborating with artists whose attitudes were not cohesive with the ideas of the League of Communists of Yugoslavia. Indirect victims of this were two representatives of neo-avant-garde circles, Slavko Bogdanović and Miroslav Mandić, who were sentenced to prison, Bogdanović for eight months, and Mandić for nine, because of their critical texts published in Új Symposion and Student magazines. When Tribina’s editorial board was replaced,  Polja and Új Symposion underwent changes that had a crucial impact on the neo-avant-garde movement in Novi Sad,then left without a home.