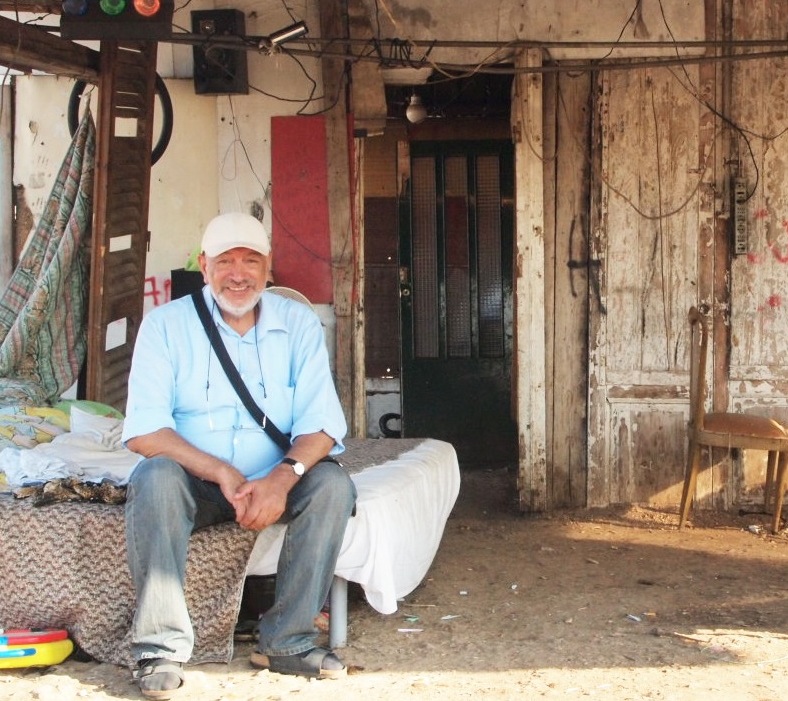 Nicolae Gheorghe was a Romanian sociologist and the most important activist for the rights of Roma people in Romania. He was born on 12 November 1946 in Roșiorii de Vede, Teleorman county in a mixed Roma family. His father was a Zlătar (“goldwasher”) and his mother belonged to a mixed family of Vătrași and Lăutari (settled Roma and musicians). Nicolae Gheorghe's parents tried to escape “the burden of ethnicity,” as his father worked as a driver and his mother made sure her son was clean and well-groomed and had no contacts with other Roma children. When Nicolae Gheorghe was nine years old, his family moved to Bucharest. In the Romanian capital, the Gheorghe family members left behind their Roma past to become a fully integrated into mainstream society. In particular, Nicolae Gheorghe made every effort to hide its ethnic origin and to suppress any remains of his Roma identity (Sandu 2012). He graduated from the Faculty of Sociology of the University of Bucharest and became a researcher at the Centre of Sociological Research in Bucharest. According to his testimony, he started reconsidering his ethnic identity as the Romanian regime moved towards a more nationalistic stance and by its policies started unofficially to emphasise the ethnic differences among its citizens (Rombase 2017). This influenced not only his behaviour but also his research agenda. One of his colleagues at the Centre of Sociological Research and an informer of the Romanian secret police, the Securitate, recorded how the rediscovery of ethnicity influenced Nicolae Gheorghe’s behaviour: “a year or two, Gheorghe Nicolae did not openly state that he was a Gypsy or that he was interested in the Gypsy problems.” But since 1982 he “has let his moustache grow, he often speaks Gypsy on the phone, and sometimes says he is dissatisfied with the way the Gypsies are treated” by the Romanian authorities (ANCSAS I 234356, f. 98 v).

Nicolae Gheorghe’s entire research activity focused on Roma people in various Romanian counties. He became particularly interested in the community of Roma tent-dwellers in Sibiu County who managed both to preserve their traditions intact and to integrate into Romanian society. During his fieldwork, Nicolae Gheorghe met Ion Cioabă, the traditional leader or the bulibașa of Roma people in Sibiu. From Ion Cioabă and his family, he learned the Romani language, he learned about Roma culture and the pride of being a Roma and living according to Roma traditions. Also, due to their close relations, Ion Cioabă offered Nicolae Gheorghe financial and moral support for his research in the Roma communities in the country in the early 1980s (ACNSAS, I 234356, ff. 40–41 f–v, 42, 46–47 f–v, 48, 98 f–v).

The results of Nicolae Gheorghe’s research revealed that Roma people lagged behind Romanians and other minorities from a social, cultural, economic, and even political point of view. That was because their collective access to “the resources of socialist development and modernisation (education, training, positions in organisations, housing, social participation)” was unequal in comparison to other ethnic groups. Apart from increasing the opportunities of Roma people to get access to education, professional training, and programmes for social integration, Nicolae Gheorghe pleaded for their official recognition as a “co-inhabiting nationality,” the term used by the communist regime to label the national minorities in Romania. This was meant not only to raise the awareness of the authorities about the disadvantaged situation of the Roma people and to force them act accordingly, but also to ensure their recognition as a distinct ethic group whose cultural specificity, including the use of the Romani language in education and printed culture, and political representation should have been protected. In short, the Romanian sociologist insisted that the best solution to solving the difficult situation in which Roma people found themselves was their integration as a distinct minority group in Romanian society (ACNSAS D 144 vol. 15, ff. 67–73).

Nicolae Gheorghe devised a strategy that would bring sufficient arguments for the recognition of Roma people as a “co-inhabiting nationality.” In various contexts, including his contacts with foreign researchers, he repeatedly mentioned that there were more Roma than population censuses recorded, and he used his fieldwork to support this statement. Apart from the numeric argument, Gheorghe also strove to demonstrate that Rome people had their own culture and that they preserved their ethnic identity through language, traditions, and customs. And finally, he authored alone or together with Ion Cioabă documents that were sent to the Romanian authorities and in which he described the difficulties facing Roma people and the possible means of solving their problems (Marin 2017, 44–47).

Nicolae Gheorghe’s endeavours conflicted with the Romanian authorities’ point of view on solving the “Roma question.” The census of 1977 revealed an increase of over 80% in the number of Roma in comparison to the previous count of the population in 1966. The growth triggered several studies about the living conditions of Roma people. The results confirmed that “Roma question” was foremost a “social problem” as extreme poverty, illiteracy, unemployment, and poor health and hygiene were still part of the Roma’s everyday life. The studies also identified the main cause of the Roma’s difficult situation in their preservation of their traditional nomadic and seminomadic way of life (Marin 2017, 25–29, 38). Thus, instead of granting them the status of a “co-inhabiting nationality” and admitting the possibility of their integration into Romanian society, the authorities decided that the best way to solve the problems of Roma people was the levelling of their ethnic and cultural particularities through forced assimilation.

The plans for forced assimilation and the increased discrimination that Roma people were subjected to by the Romanian authorities, especially by the communist Militia, were denounced by Nicolae Gheorghe in an article published in Le Matin on 30 March 1982 (ACNSAS, I 234356, ff. 230 f–v, 231). The article, written under the pseudonym “Danciu Alexandru,” was read during one of the broadcasts of Radio Free Europe. It was a reply to a piece written by the French journalist Bernard Poulet, who had told the readers of Le Matin how was attacked and badly beaten when he tried to contact the Romanian dissident Vasile Paraschiv. The official explanation that Poulet got from the authorities was that he had been attacked by a group of “Gypsies.” Nicolae Gheorghe rebuked the conclusion of the investigation by showing that Roma people were usually blamed for everything that went wrong in Romania, and denounced the violence used against them by the Militia and the refusal of the Romanian authorities to grant them the status of a “co-inhabiting nationality” (ACNSAS, D 144, vol. 15, ff. 315–317 f–v, 318). Suspecting that Nicolae Gheorghe was the author of the article read at Radio Free Europe, the Romanian secret police intensified their informative surveillance of him. At that time the Securitate had already opened an informative surveillance file (dosar de urmărire informativă) against his name due to his frequent contacts with foreign academics and his “Gypsy nationalism,” as the secret police had labelled his interventions in favour of Roma people’s rights.

The set of measures designed by the Securitate to neutralise the allegedly negative consequences of Gheorghe’s “Gypsy nationalism” resulted in three main directions of actions. First, the Romanian authorities did not grant him an exit visa for his journeys abroad in 1983, not even for a Fulbright Scholarship, on the ground that his research topic could raise some “problems that can be speculated abroad about so-called racial discrimination.” Moreover, his connections with foreign researchers were cut off as the Securitate intercepted and confiscated the correspondence between them (ACNSAS, I 234356, ff. 148–150, 174–175 f–v). Second, taking advantage of a personal conflict between Ion Cioabă and Nicolae Gheorghe, the Securitate managed to break up the collaboration between the two and thus, undermine any further common actions in favour of the recognition of the Roma as a “co-inhabiting nationality” (ACNSAS, I 234356, ff. 255 v, 257 f–v, 172057 vol. 2, f. 30 f; D 8685, ff. 119 f–v–120). Lastly, the secret police resorted to one of its preventive measures, so-called “positive influencing measures” (măsuri de influențare pozitivă). These measures generally used the network of informers, family members, and educational agents to protect the person in question from allegedly negative influences that might lead to his or her taking part in “anti-social and potentially harmful actions” (Burlacu 2009, 64). Consequently, the secret police used two persons close to Nicolae Gheorghe, namely his line manager at the Centre of Sociological Research and also his godfather. The first deterred Gheorghe’s attention from the “Roma question” by involving him in other research projects that gradually monopolised a significant part of his working time (ACNSAS, I 234356, ff. 263, 273–274 f-v). His godfather, identified under the pseudonym “Ionescu Vasile,” constantly showed him that his obsession with the study of Roma issues had led (“through repeated absences from home and lack of interest in problems of practical life”) to the dissolution of the family and represented a step back in his career as a sociologist. Moreover, he also tried to demonstrate the futility of Gheorghe’s support for the integration of Roma people into Romanian society by showing that their assimilation was the only possible means for their transformation into “normal citizens, useful to society” (ACNSAS I 234356, ff. 262, 275 f–v). The cumulative result of his isolation from Ion Cioabă, the breakup of his marriage, and the “positive influencing measures” taken by the Securitate was that Nicolae Gheorghe abandoned his studies regarding Roma people and his actions in favour of their recognition as a “co-inhabiting nationality.” Consequently, in April 1989 the secret police decided to close their informative surveillance of him and even considered recruiting him as an informer (ACNSAS, I 234356, ff. 320 f–v, 321).

After the fall of the communist regime, Nicolae Gheorghe rebuilt from scratch the civic movement for the rights of Roma people in Romania. In 1993, he founded The Roma Centre for Social Intervention and Studies (Romani Criss), which in the following years would become one of the most important nongovernmental organisations for the defence of Roma rights in Romania and indeed in Europe. He also made an important contribution to the creation of the first political organisation of Roma people in Romania and in uniting the many Roma organisations for the purpose of creating a national strategy for dealing with the problems of this minority (Rădulescu 2013). Nicolae Gheorghe also distinguished himself as an internationally known Roma activist. He was one of the vice-presidents of the International Roma Union between 1991 and 1993. In collaboration with the International Federation on Human Rights, he authored a document about Human Rights Protection of the Roma, which was accepted into Resolution 65/1993 by the UN Commission on Human Rights. As an NGO representative, Nicolae Gheorghe acted as an official observer at the meetings of the European Council’s group of specialists on issues affecting the Roma and also the Sinti. From 1999 he was advisor for Roma and Sinti issues at the Contact Point for Roma and Sinti Issues created by the OSCE at the Office for Democratic Institutions and Human Rights in Warsaw. He received human rights awards from the French state in 1992 and five years later from the European Union (Rombase 2017; V. Ionescu 2013).

Burlacu, Liviu. 2009. “Preventive Measures Used by the Securitate.” In Learning History through Past Experiences: Ordinary Citizens under the Surveillance of Securitate during the 1970–1980s. Edited by Virgiliu Țârău, 64–66. Bucharest: Editura CNSAS.