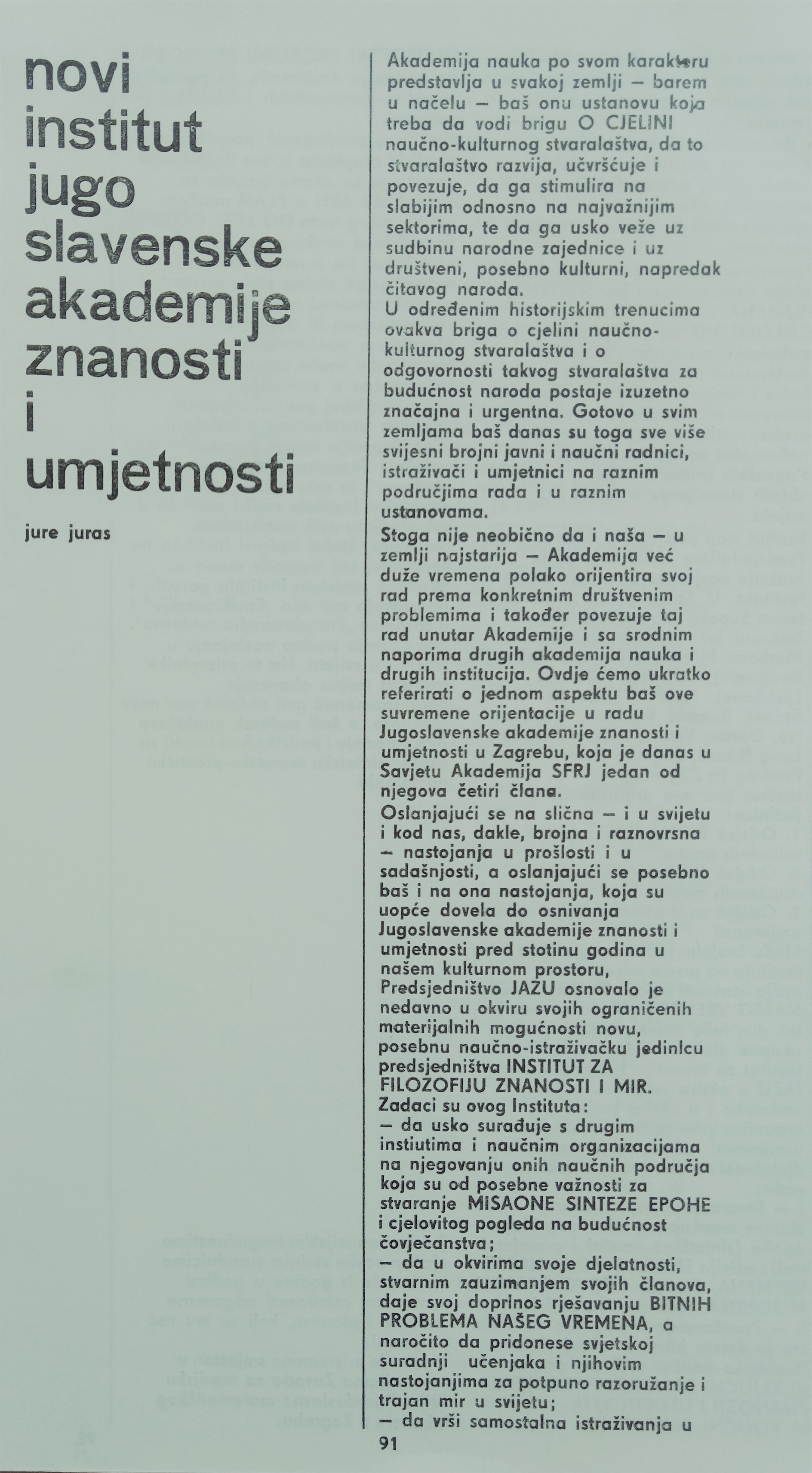 The Institute for the Philosophy of Science and Peace of the Yugoslav Academy of Sciences and Arts (JAZU) was founded at the initiative of Ivan Supek in Zagreb in 1965. In 1992, the Institute became the Philosophy of Science Division of the Institute for the History and Philosophy of Science of the Croatian Academy of Sciences and Arts (HAZU).
The establishment of this Institute was directly tied to the Pugwash movement or the Pugwash Conference, and the word "peace" in the name of the Institute indicated this peace movement. The mission of the Institute was to contribute to the worldwide cooperation between scholars and their endeavours for total disarmament and lasting peace in the world (Juras 1966, 91-92). The Institute's mission was to become the centre for gathering Pugwash groups in Yugoslavia. The Institute was relatively small, consisting of three to five people, mostly Supek's assistants. Supek insisted that there must be at least one physicist and one biologist, and a philosopher. By the end of the 20th century there were several distinguished scientists employed by the Institute, and among Supek's first collaborators were Jasmina Lelas, Srdjan Lelas, Miroslav Radman, Zdravko Radman, Zlatko Klanac, Bojan Marotti, Tihomir Vukelja and others (interview with Bojan Marotti).

One of the main activities of the Institute was the publication of the multidisciplinary journal Encyclopaedia moderna since 1966. Ivan Supek served as its editor-in-chief. The Institute was also a critical factor in the establishment of the Yugoslav Pugwash Society in 1967, which was also headed by Supek until 1985 (Knapp 2013, 86). However, the close connection with the Pugwash movement was lost by the beginning of the 1990s, which is evident from the fact that the word "peace" was removed from the name of the institution (Division for the Philosophy of Science). Today, the Division focuses on a multidisciplinary approach to scientific research as a general phenomenon, primarily in the natural and technical sciences, and their relation to the broader spiritual and historical context. Therefore, in 1992 the Division merged with the newly established Institute of the History and Philosophy of Science as one of its divisions. Interdisciplinary research in the fields of physics, philosophy of language and ethics is conducted in the Division today, and the ultimate goal is to contribute to the foundation of a new theory of scientific knowledge.