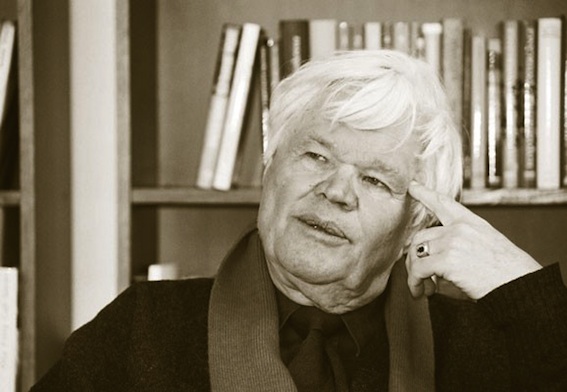 Eginald Schlattner (born 1933) is a German writer in Romania and a Lutheran pastor in the community of Roșia, Sibiu county. He was imprisoned under communism for his writings and activity related to an alternative literary circle. Since 1989, he has published several volumes inspired by his experience under communism, which have enjoyed a notable editorial success in the German-speaking countries and then in Romania. Born in a middle-class German family in Arad, he spent his childhood in the small town of Făgăraș. The multicultural milieu of this small Transylvanian town inspired his later literary works. In January 1945, his father was among the members of the German community in Romania who were deported to the USSR.  A student at the Protestant Theological Institute in Cluj between 1952 and 1953, Schlattner then switched to hydrology (1953–1957). His literary debut consisted of a story entitled “Gediegenes Erz” (Solid ore), for which he was awarded a prize in April 1956 by the official German-language newspaper in Romania, Neuer Weg. However, this story attracted the interest of the Securitate towards him in the context of the repression following the Hungarian Revolution of 1956.  After reading passages from “Gediegenes Erz” during a youth reunion in Brașov, Schlattner was put under surveillance. Arrested in 1957 just before his graduation, he had to face the rigours of interrogations by the Securitate, while his manuscripts, correspondence, and books were confiscated. Some of his statements made during the brutal interrogations were used against fellow writers. He was practically turned into a witness for the prosecution during the so-called Trial of the German Writers, which took place in September 1959 in Brașov. Besides those involved in this trial, Schlattner was also sentenced in 1959 to two years in prison, but his sentence was compensated with the period he had already spent in arrest. Thus, his role in this trial continues to be subject of controversy, especially among the members of the German community originating from Romania. Released two years later, he was employed as an unskilled worker. It was only in 1969 that he resumed the study of hydrology. After graduation, he worked as an engineer until 1973. He then returned to the study of theology, graduated in 1978, and began serving as a Lutheran pastor in the village of Roșia, Sibiu county, and later as a prison chaplain. After his release from prison, he was continuously kept under surveillance by the Securitate until 1989. Schlattner’s complicated entanglements with the secret police made him one of those cases which provoked public debates on the use of such clear cut categories as victims and collaborators in the case of the communist regimes. It was after the regime change that Eginald Schlattner rose to prominence as a writer by publishing several autobiographically inspired novels with Paul Zsolnay Publishing House in Vienna: Der geköpfte Hahn (The beheaded rooster) in 1998, Rote Handschuhe (Red gloves) in 2000, and Das Klavier im Nebel (The piano in the fog) in 2005. International fame eventually brought him literary recognition in his native country, to the point of becoming cultural ambassador of Romania in 2002.