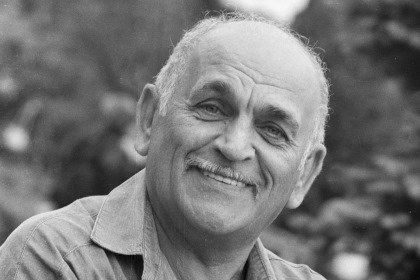 Mikhail [Moisei] Naumovich Kalik (b. 29 January 1927, Arkhangel’sk, Russia – d. 31 March 2017, Jerusalem, Israel) was a Soviet director and screenwriter of Jewish background, based in Moscow and Chișinău, where he worked at the Moldova Film-Studio. In 1949, Kalik enrolled in Grigorii Aleksandrov’s directing workshop at the Soviet State Film School VGIK. Two years later, he and four fellow students were arrested and accused of of “Jewish bourgeois nationalism” and of “planning anti-Soviet terrorist acts.” Kalik was sentenced to ten years of hard labour according to article 58-17 of the Penal Code of the RSFSR (production and dissemination of counter-revolutionary literature). He was sent to a GULAG concentration camp in the Far North. Rehabilitated in 1954 and readmitted as a third-year student to the VGIK, Kalik was able to continue his studies with Sergei Iutkevich, graduating in 1958. Kalik’s debut was Ataman Kodr (The Forest Outlaw Chieftain, 1958), co-directed with Boris Rytsarev after Ol’ga Ulitskaia had abandoned the project), produced by Moldova-Film Studio. A fast-paced, action-filled historical adventure, it romanticises Moldavian Robin-Hood-like outlaws. At the Moscow Gor’kii Studio for Children’s and Youth Films, Kalik then co-directed Iunost’ nashikh ottsov (The Youth of Our Fathers, 1959, with Rytsarev), a Civil War drama adapted from Aleksandr Fadeev’s pro-Bolshevik novel Razgrom (The Rout, 1927). With the independently directed Kolybel’naia (Lullaby, 1960) Kalik found his own theme and style, focusing on children whose innate goodness and openness to the world defines the film’s ethical perspective. Consisting of several novellas, Lullaby tells the story of a girl who is orphaned in World War II yet ultimately finds her father. Kalik’s best-known film is Chelovek idet za solntsem / Omul merge după soare (Man Follows the Sun, 1961), from a screenplay by Valeriu Gajiu, about a six-year-old boy who in one single day experiences numerous facets of life, from friendliness and help to heartlessness and rejection. “Sandu discovers a world full of natural light, towards which people gravitate as naturally as sunflowers turn their heads to follow the sun” (Josephine Woll). However, one brief erotic episode caused the indignation of Nikita Khrushchev and led to administrative measures against Kalik. At Mosfilm Studio, he directed Do svidaniia, mal’chiki! (Good-bye, Boys!, 1964), a poetic story of three friends in a port town during the 1930s; the film benefits particularly from Levan Paatashvili’s magnificent black-and-white imagery. Liubit’ (To Love, 1968), made at Moldova-Film, consists of four shorts adapted from stories by different writers, exploring the nature of affection and mixing fictional and documentary scenes. The film was censored, released in a limited number of copies, withdrawn from distribution in the summer of 1969, and restored by the director in 1990. Tsena (The Price, 1969, TV, first broadcast in 1989), adapted from an Arthur Miller play about two alienated brothers, was Kalik’s last Soviet film. He emigrated in 1971, after which his name was eliminated from all Soviet publications. In Israel, Kalik made one feature film, Shlosha V’achat (Three and One, 1974), and worked as a teacher. In 1991, Kalik came back to Russia for a short period and directed I vozvrashchaetsia veter… (And the Wind Returns…), a meditation about his turbulent life and artistic accomplishments, including fictionalised episodes and scenes from his earlier films. He died in Jerusalem in March 2017.