Recital You Don't Renounce What You Haven't Got!. 1979. Press clipping 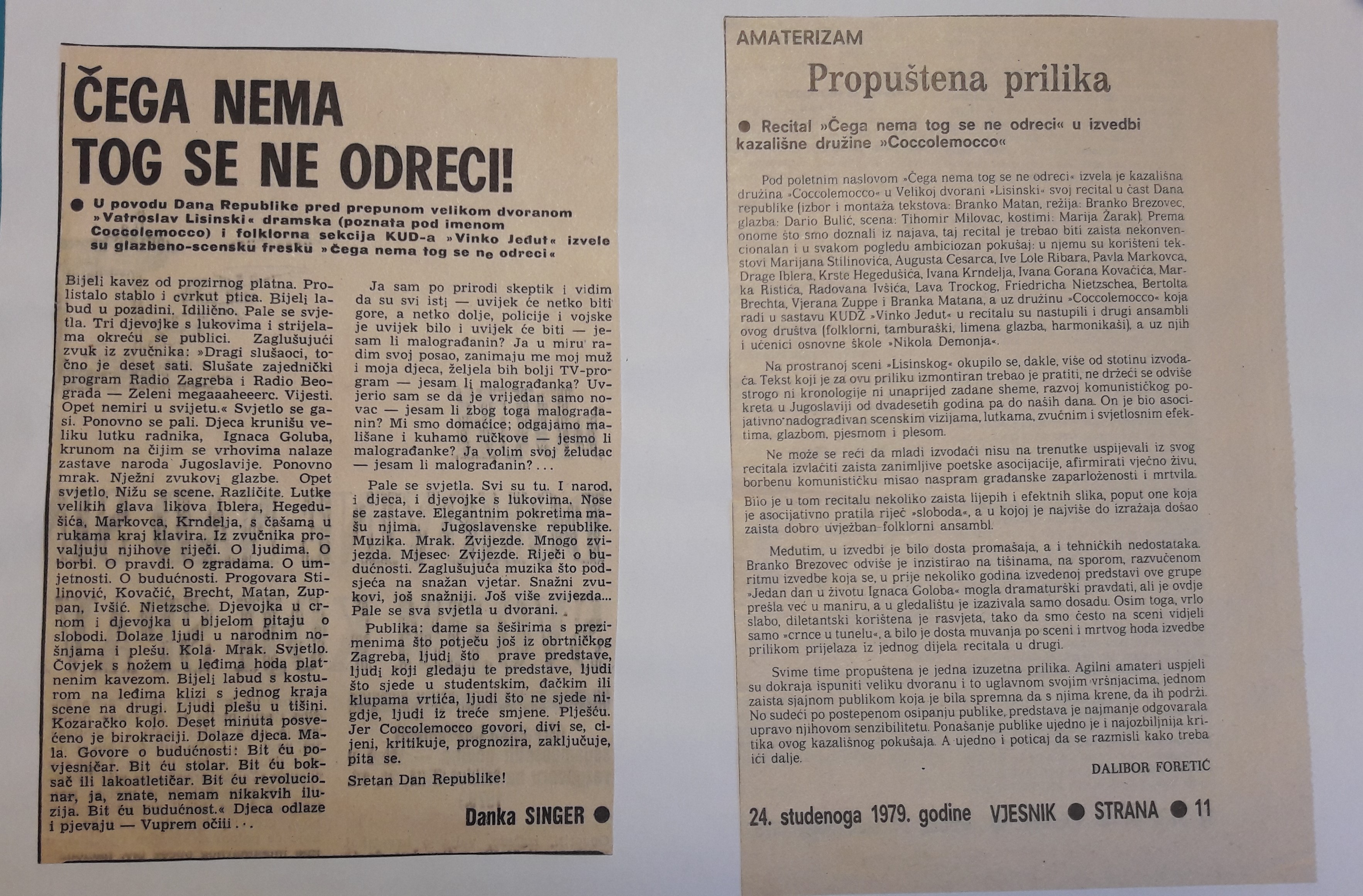 The premiere of the mega-recital You Don't Renounce What You Haven't Got! by the theatre company Coccolemocco, then operating as a theatre section of the Society of Amateurs in Culture and Arts Vinko Jeđut, was held at the Vatroslav Lisinski Concert Hall in Zagreb as part of Republic Day celebrations, on November 18, 1979. Later, the recital toured festivals in Yugoslavia (Skopje and Young People’s Theatre Days of Dubrovnik) and performed on the Republic Square (today Ban Josip Jelačić Square) on the anniversary of the liberation of Zagreb on the 8th of May.

In their pursuit of an authentic theatre language, the company continued to explore the forms that were usually ridiculed by professional bel-esprit theatres such as socialist rallies and parades, choral recitations and alike, performed on the occasions of important anniversaries (Republic Day, May Day, Veterans Day, Antifascist Revolt Day) which were staged in a hurry and without any creativity.  The performance You Don't Renounce What You Haven't Got! against any conventions, followed the development of the communist movement in Yugoslavia from the twenties to the late 1970s. The performance consists of texts dealing with the revolution from the position of unrealized left-wing forces, as Brecht sang: revolution’s "mountain hardships" but also "lowland hardships." Writings, poems and quotations by Marijan Stilinović, August Cesarec, Ivo Lola Ribar, Pavao Markovac, Drago Ibler, Krsto Hegedušić, Ivan Krndelj, Ivan Goran Kovačić, Marko Ristić, Radovan Ivšić, Karl Marx, Leon Trotsky, Friedrich Nietzsche, Bertolt Brecht, Vjeran Zuppa, Branko Matan and others were used. All sections of the Society of Amateurs in Culture and Arts Vinko Jeđut with more than a hundred participants appeared on stage. The show included, in addition to the members of Coccolemocco, a folklore ensemble, orchestras of accordions, brass instruments, tamboura, a wind orchestra, the Jeđutovke Choir, and a group of children from the Nikola Demonja Elementary School.

According to Gordana Vnuk, the recital You Don't Renounce What You Haven't Got! was critical of some aspects in self-managing socialism, such as state-sponsored public events omnipresent at the time. The performance was a persiflage which pointed to the totalitarian aspect of social realism and its forms of public representation. It could have been described as a collage of visually spectacular images characterized by poetic anarchy and subversion outside any protocols (Vnuk, interview, January 26, 2018). Performing this event during official celebrations was probably the greatest persiflage they could have done, and not be punished for it.

Gordana Vnuk cut the newspaper articles about the recital and stored them in her collection, along with the program leaflets, theatre tickets, and other documentation related to the recital You Don't Renounce What You Haven't Got!