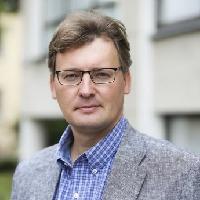 Saulius Grybkauskas is a senior research fellow at the Lithuanian Institute of History. He defended his PhD ‘Industrial Management in Soviet Lithuania. Tensions and Conflicts, 1965-1985’ in 2007. Grybkauskas is the author of two books and a number of research articles. His main research interests include the Soviet nomenklatura, KGB activity, Soviet economic policy, and the Soviet regime's control of society.

több
Grygar, Milan
Milan Grygar is a Czech painter and graphic designer. He studied at the Academy of Arts in Brno and the Academy of Applied Arts in Prague. His work mainly focuses on the relationship and links between the visual and aural aspects of artistic expression. In 1965 he created his first acoustic drawing. Grygar recorded the emergence of these acoustic drawings on tape recordings. Since the end of the 1960s he has also created “tactile” acoustic drawings, where he joined sound with the gestures of the human body. During the mid-1960s, he created a series of conceptual scores based on acoustic drawings. At the end of the 1980s, Grygar returned to painting (the series Black Paintings, Polemics with a Square, Antiphone), but where the role of sound continues to be important.
több 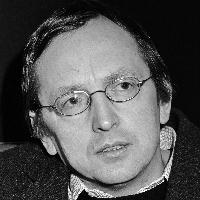 Grzegorzewski, Jerzy
Jerzy Grzegorzewski was a theatre director, scenographer, scene writer and a painter. During his 50-years-long career, he worked in most of the acknowledged Polish theatres. He held the office of a general director of the National Theatre (1997-2005) and the Studio Theatre (1982-1997) in Warsaw, directed plays in Stefan Jaracz Theatre in Łódź (1970-1976) and the Old Theatre in Cracow (1978-1982). Additionally, he was an artistic director of the Polish Theatre in Wrocław (1978-1981). He had his first play directed in 1961, while the last one directed in 2005. He played a decisive role in the creation of the artistic vision of the Studio Theater in Warsaw, which he managed from 1981 to 1997. After his death, the Studio Theater decided to establish a special unit – the Jerzy Grzegorzewski Archive, in order to document and preserve his legacy. Grzegorzewski is considered one of the most important creators of the contemporary Polish theatrical scene, as he managed to balance the avant-garde theatrical vision alongside the respect towards the tradition and literature. This was the reason why he was criticized by different groups of theater enthusiasts – for the avant-garde movement he was too conservative, while the traditionalists considered him too subversive. Paradoxically enough, this ambivalent position helped him to become the director of Studio Theatre in the 1980s. His works were considered too distinct and peculiar by the Communist Party’s authorities, and thus, he was not perceived as a threat to the dominant socialist narrative. During his career he received national and international awards, while his spectacles were shown abroad as an outstanding example of the Polish contemporary theatre. Notwithstanding, even if not openly political, the plays staged by Grzegorzewski have always opposed the dominant socialist paradigm of the individual and the collective.
több
Grzegorzewski, Zbigniew
In 2009 Zbigniew Grzegorzewski donated to the Institute of National Remembrance a 30-minute video recording from reverend Jerzy Popiełuszko's funeral in November 1984 in Warsaw. The author of the film remains unknown, but the footage shows the social mobilization around the murdered priest and the climate in Warsaw just after the end of Martial Law.
Unfortunately, no further information about Grzegorzewski and his involvement in the dissent movement is available.
több
Grünberg-Soldatova, Ludmilla

Ludmilla Grünberg-Soldatova was the second wife of Sergei Soldatov. She edited many of his publications. After his death, she edited and published a 15-volume collection of his works in 2004-2006. In accordance with Soldatov's wish to keep his papers in Estonia, she sold them to the National Library of Estonia in 2006.
Ludmilla Grünberg-Soldatova is not a public figure in Estonia, and thus there is little information available on her.