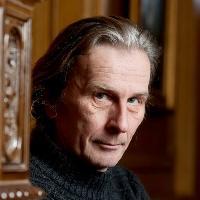 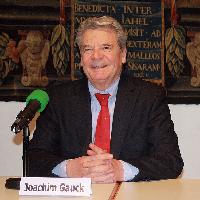 Gauck, Joachim
Joachim Gauck, a Protestant theologian, worked for many years as a church functionary in the GDR until he became part of the Civil Rights movements, joining the New Forum. Thereafter, he was named Chairman of the special People’s Assembly committee charged with overseeing the devolution of the former Ministry of State Security. Following German reunification, the Federal Government tasked him with securing, administering and researching the records of the State Security Service. Until the year 2000, Gauck held the office of Federal Commissioner for the Records of the State Security Service of the former German Democratic Republic. From 2012 until 2017 he was the eleventh President of Germany.
több
Geipel, Ines
Ines Geipel was raised in a family loyal to the communist party and was an internationally known public face of the GDR as member of the national track and field athletics’ selection. When she had fallen in love with a Mexican athlete, she pondered to defect. But plans to flee the country were thwarted by the State Security. In the aftermath, she was subjected to measures of so-called "Zersetzung" (i.e. secret methods of control and psychological manipulation) until her professional career as an athlete was destroyed.
Geipel therefore had to start a new career outside of athletics. She studied German philology in Jena and moved more and more openly in oppositional circles. After fleeing the country via Hungary in the summer of 1989, she enrolled at the university of Darmstadt studying philosophy there. Since 2001, she has been professor for German poetic language at the Ernst Busch Academy of Dramatic Arts in Berlin. Geipel fights for the legal recognition of GDR doping victims. Since the 1990's, she has also been working as a publicist. Together with Joachim Walther she founded the "Archiv of Suppressed Literature in the GDR".
több
Genyk-Berezovska, Zina

Zina Genyk-Berezovska was a Czech literary scholar, linguist and translator, who was born in a village outside Prague in 1928 into a community of Ukrainian émigrés. She was an important figure in the Ukrainian community in Prague, and was also integrally involved in the sixtiers movement, underscoring its transnational character. Genyk-Berezovska communicated regularly with Ukrainian literary figures and human rights activists, often putting her own self at risk by transporting samizdat from Ukraine to Czechoslovakia.

In 1953, Genyk-Berezovska completed her studies at Charles University in Prague, where she had focused on Slavic and Germanic Philology. Her research specialized on Ukrainian and Czech literature and the links between them, which helps situate Ukrainian literature of the nineteenth and twentieth centuries firmly in the European tradition. She also translated many works of Ukrainian baroque literature into Czech, including texts by Hryoriy Skovoroda, Ivan Kotliarevsky, Taras Shevchenko, Lesya Ukrainka, Mykhailo Kotsiubynsky and others. Often speaking on Czech radio, Genyk-Berezovska also regularly contributed to Ukrainian émigré journals “Duklja” and “Slavia” in Czechoslovakia, while also maintaining close ties to both the T.H. Shevchenko Institute of Literature in Kyiv and the Slavic Department of Lviv University.

Genyk-Berezovska was close to Lesya Ukrainka’s sister O. Kosach-Shymanovska, and also had friends and colleagues among the sixtiers movement, including Yevhen Sverstiuk, Ivan Svitlychny, Mykhailyna Khomivna Kotsiubynska and others. She played a crucial role in getting their materials published abroad in émigré journals, which allowed knowledge of the struggles of Ukrainian dissidents and human rights activists to circulate in the west. This Czech-Ukrainian corridor provides a unique window into the translational and multi-generational dimensions of cultural opposition to socialism in Ukraine and in Ukrainian émigré communities. It was thus fitting that the archive of Zina Genyk-Berezovska and her husband Kostiantyn Genyk-Berezovsky was transferred to the T.H. Shevchenko Institute of Literature in full in 2003, where it rests alongside the archives of her friends and fellow activists Vasyl Stus and Mykhailyna Khomivna Kotsiubynska.

Kostiantyn Genyk-Berezovsky was a Ukrainian philologist born near Ivano-Frankivsk in 1919. He went to study at Jagellonian University in Krakow in 1938, but shortly after the start of World War II moved to Prague, where he became a member of the anti-fascist movement. He was arrested in 1942 by the Gestapo and spent the remainder of the war in the concentration camp Flossenbürg. After World War II, he studied medicine (1946-1949) and philosophy (1949-1953) at Charles University in Prague, where he received his doctorate. From 1953-1979, he was a faculty member of the Slavic Department, where he taught Ukrainian. This institution became one of the major Ukrainian studies centres in Prague after World War II. He also taught Ukrainian language and literature at newly established Ukrainian schools in Prešov and Bardiyiv. Genyk-Berezovsky also wrote and edited Ukrainian textbooks for the community and also contributed to the Ukrainian-Czech and Czech-Ukrainian dictionaries.

The home of Kost and Zina Genyk-Berezovskykh became an unofficial center of Ukrainian life and community in Prague. It was a warm place where it was possible to look deep into the past, as observed by Mykhailyna Khomivna Kotsiubynska, who was responsible for bringing their personal archive to Kyiv in 2003. No one interested in Ukraine, or Ukrainian literature, who came through Prague missed an opportunity to visit their home and vast library and archive, which filled two rooms. People came to their home to connect, to discuss important matters of the day, to get help, and even to sing, as Kost’ knew many folk songs and loved to sing them. The home of the couple was a community centre in the truest sense, connecting two cultures and two worlds in one.