Juliana Jirousová was born in September 1943 in Stará Říše. Her father was the painter Otto Stritzko and her mother, Marie Florianová, was also a painter. Juliana’s grandfather, Josef Florian, was an important publisher and translator, who also lived in Stará Říše.

As a result of her so-called “cadre profile”, Juliana Jirousová was not allowed to study at university. Since she did not want to pursue a career in art as her family had done, and could not study, she sold furniture in Prague for a year. However, she soon started painting, influenced by Byzantine enamels. From 1964, she was employed as an art therapist at a psychiatric hospital in Havlíčkův Brod. She worked for a while in the most well-known psychiatric hospital in Czechoslovakia – Bohnice in Prague. However, she returned to Stará Říše due to the links between the medical staff and the secret police (StB). At home she continued to paint.

In 1972 she met Ivan Martin Jirous and began attending events connected with the underground and concerts by the band The Plastic People of the Universe, whose manager was Jirous. Juliana became integrated into the so-called second culture. Four years later, Jirous and Juliana got married and Jirous used his wedding as a pretext to hold the second Festival of the Second culture in Bojanovice. In response to the festival, Jirous was arrested and convicted in the “trial of the Plastic People“. After his release from prison in 1977, Jirous and Jirousová signed Charter 77. Besides writing poems, organizing “second culture” and managing the underground band The Plastic People, Jirous alias “Magor”, was also involved in creating samizdat volumes. His wife helped and supported him in these activities. During their marriage Jirous was imprisoned four times.

While they were separated, the married couple wrote letters to each other. Extracts from these letters were published in samizdat volumes (for example, in the magazine Koruna), and after the Velvet Revolution part of this correspondence was published in 2015 (Ahoj můj miláčku). Despite the prison censorship, these letters shed some interesting light on the life of prisoners. They help literary scholars in their studies of poems by Jirous, and they provide colour to the events of the seventies and eighties. The publishing house Torst owns some of these letters, and some of them were donated by Juliana and her daughter Františka to the Libri Prohibiti library. Juliana still lives in Stará Říše, where she focuses on painting with Christian motifs. 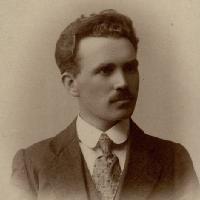 Ignas Jonynas was a Lithuanian historian. His works and studies (especially his seminal work ‘Vytautas’ Household’, written in 1932) laid the foundations for modern Lithuanian national historiography. During the interwar period, he was not only a professional historian and professor at Kaunas State University, but also a diplomat (from 1920 to 1922, he represented the Republic of Lithuania at the League of Nations. Later he worked at the Ministry of Foreign Affairs for a couple of years).  Like several other Lithuanian intellectuals, writers and scholars, Jonynas appears to have sympathised with Soviet Russia. This is probably because he studied at Moscow University and liked Russian culture. He decided to stay in Lithuania after 1944. (His two sons left Lithuania.)

He became a professor at Kaunas and Vilnius universities (from 1946, only at Vilnius University). His lectures were very popular with students, especially historians. His ideas on history were based on principles of historicism and positivism. Jonynas taught some famous Lithuanian historians: such as Vytautas Merkys and Mečislovas Jučas. He organised special 'historical’ trips for historians around important places in Lithuanian history. In 1948 and 1949, he was attacked severely by the University Party Committee, and later by leaders of the Lithuanian Communist Party, for ignoring Marxist methodology, and for ‘bourgeois nationalism’. Jonynas admitted to ‘ideological mistakes’, and continued his professional career at the university.

több
Jovanović, Suzana
Suzana Jovanović  is the widow of Lazar Stojanović and the heiress to his collections. She posesses the copyrights for the use of all his artistic works and for the material of his collections.
több
Juozėnaitė, Justina

Juozėnaitė was born in Vilnius in 1988. Juozėnaitė was invited by Birute Vagrienė, the director of the museum, in 2011. The director of the museum knew Juozėnaitė as a specialist in the poetry of Tomas Venclova. She had studied Venclova's family history, and was especially interested in Venclova's activities. Tomas Venclova was an anti-Soviet dissident, and a close associate of Viktoras Petkus. Juozėnaitė took part in the international project 'Landmarks of New Europe'.

According to Juozėnaitė, cultural opposition is a form of resistance to official Soviet ideology. It is how the intelligentsia reacted towards the policy of the Soviet government, how dissidents changed the attitudes of society to the Soviet reality.