52 talált személy
Listázandó tételek oldalanként:       «« előző oldal 1 ... 1 2 3 4 5 6 7 8 9 10 11
Dłubak, Armelle
Wife of Zbigniew Dłubak. Since his death in 2005, she is the owner and stakeholder of the entire Zbigniew Dłubak Collection. Mrs. Dłubak, a French citizen herself, came across the socialist reality thanks to her relationship with Zbigniew. Notwithstanding, she agreed to transfer all the Dłubak's works to Poland after his death. She cooperates with the Archeology of Photography Foundation and is a member of its Advisory Board. However, she is not fond of commenting Dłubak's private life and legacy, thus, leaving the analysis of his work to art historians and photographers.
több 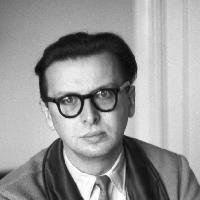 An art theoretician, painter and photographer.

An autodidact himself, Dłubak practiced photography and painting in an informal setting during the course of the WWII. It was after his detention in the Mauthausen concentration camp, that he organized his first artistic exhibitions within the camp’s facilities. He returned to Poland after the end of the war and took an active part in the reconstruction of the Polish artistic life.

In his speech delivered at the Nieborów meeting organized by the Ministry of Culture and Art in 1949, Dłubak took a highly critical stance against the socialist realism art doctrine. He tried to convince the political elite and the Ministry's officials to also appreciate the value of the experimental work - in his opinion equaly important as the politically engaged art and the political engagement of the artist. The rigid stance of the Polish officials discouraged Dłubak - in the beginning supporter of the socialist changes - and caused his withdrawal from the artistic life for several years.

He became one of the cofounders of the art group Grupa 55. Between 1947 and 1949, he participated in the art work promoting the modern views of The Club of Young Artists and Scientists in Warsaw. In the time period from 1953 to 1972 he was the editor-in-chief of the Fotografia monthly. In 1948 he was one of the organizers of the Contemporary Art Exhibition in Kraków. He cooperated with several Warsaw-based galleries - Krzywe Koło, Współczesna, Foksal and Remont, while later on he collaborated with the galleries "Permafo" and Seminarium-Foto-Medium-Art from Wroclaw. In the years 1965-1975 Dłubak hold a position of a lecturer at the National Film School in Łódź and the Higher School of Fine Arts in Łódź.

In the late 1940s, his work contained surrealistic and abstractionist (geometrical and allusive), and sporadically, constructivist references. During the period of dogmatic socialist realism, he tried to withdraw from the artistic life, however he did make works that were inspired by this growing trend and wrote texts on photographic exhibitions. During this period he also photographed his own series of anti-aesthetic urban landscapes.

In the early 1980s, he moved to Meudon, in the outskirts of Paris, ehre he dedicated his time extensively to his art work, before returning to Warsaw for the last years of his life. Beside his personal reasons, his return to Poland was linked to the organisation of his exhibitions and the revival of his interest in the Polish avantgarde art from the socialist times.